Each day, the Warden rolls on the Weather table for the appropriate season.

When using a hex map, assume that the Travel action moves the party to an adjacent tile in one watch at Normal travel speed, and that if they get lost the party ends up in an adjacent hex.

A torch can be lit 3 times before degrading. A lantern can be relit 6 times per oil can, but requires more inventory slots.

If the “Extreme” weather result is rolled twice in a row, the weather turns to “Catastrophic”. A summer squall becomes a hurricane, a fall storm floods the valleys, etc.

In this example we’ll be using a map made with Watabou’s terrific Perilous Shores generator. 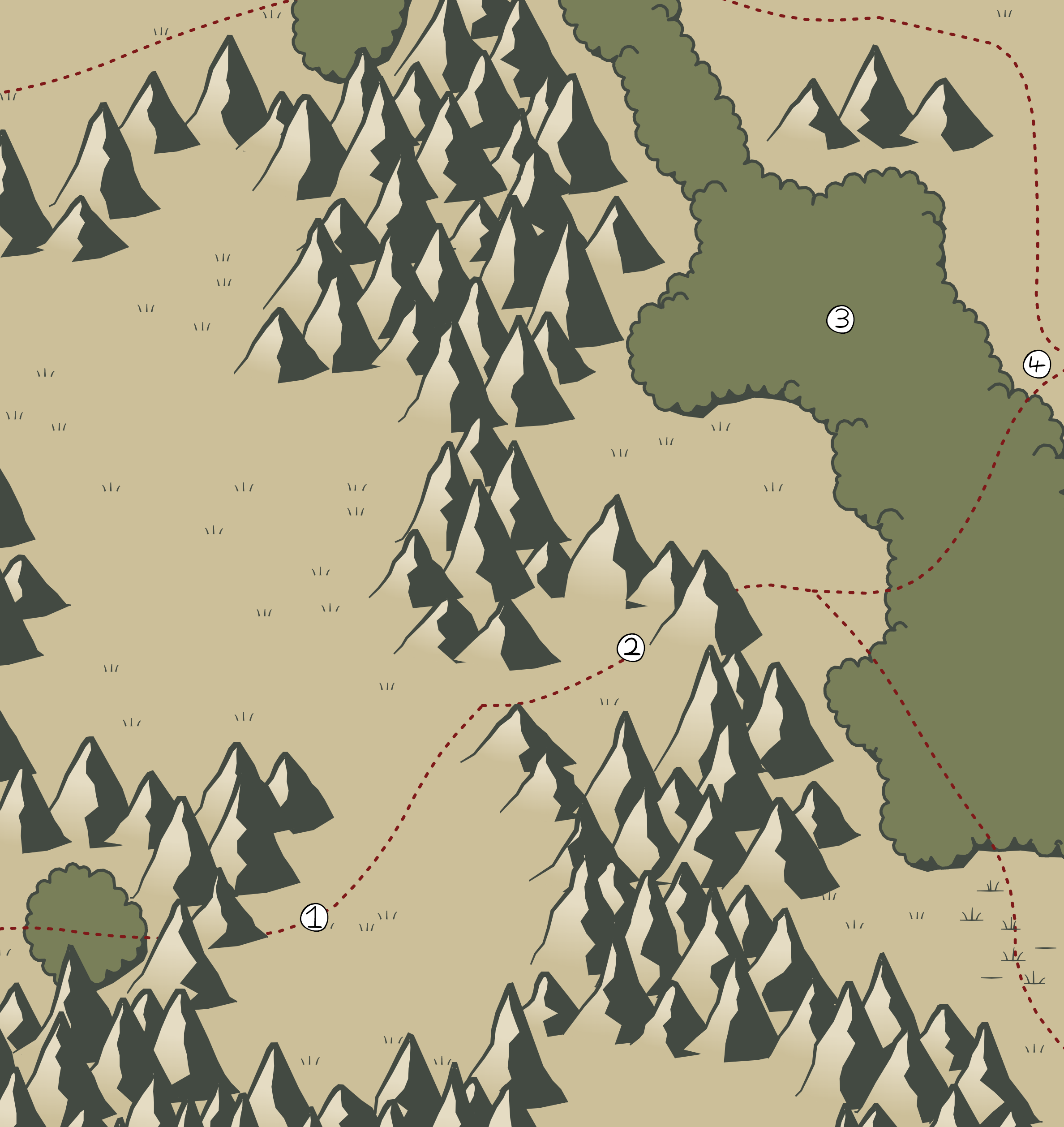 A party of 3 PCs (Leib, Konstin, and Gar) are plotting a journey to an ancient ruin deep in the forests of Ein Eyton. They plan to walk by foot. The forest (at 3) is separated from the party’s present location (the village of Rudbat, at 1) by the neighboring Range of Deshe (at 2), a short distance away.

The Warden explains that travelling on the forgiving roads from the village to the hills will require only a single watch, but that it will take three additional watches for the party to complete their journey to the forest, assuming they spend one watch sleeping.

The party accepts this route, plotting their route: one watch to reach the hills (morning), one watch partway through the hills (afternoonh), then another watch sleeping (the Making Camp action) at (night). The party would spend the following day’s morning watch travelling to their final destination. On the first day of travel, the Warden rolls a 3 on the Weather table (Fall: Cool and foggy).

For their first watch, the party chooses the Travel action, taking the road through the farmlands and to the hills. The terrain, weather, and current party status indicates that the Difficulty level is Easy. The party is able to travel with no forseeable problems, so the Warden rolls on the Events table. The result is an Encounter. The Warden explains that the party crosses paths with an NPC travelling South, who gives them a piece of advice: “Avoid the hills, there are bandits about!” The party notes this and moves on, arriving in the Range of Deshe after lunchtime. They rest near a streambed, stepping off the dusty road for the first time.

For the party’s second watch, the Warden explains that this area is peppered with small rocks and uneven hills, setting the terrain Difficulty to Tough. Worse yet, without a guide the party might easily lose their way! The players discuss whether it would be better to spend a watch exploring the area, perhaps even finding a faster (and safer) way through.

The party agrees that arriving at their destination sooner is worth the risk, and proceeds with the Travel action again. The players discuss how to avoid Getting Lost, checking to see if anyone in the party has knowledge of the area, relevant experience, or a map. They do not, so the Warden rolls 1d6. The result is not a 1 or a 2, and the party moves on as planned.

The Warden rolls on the Events table, and the result is Environment. The Warden explains that a short while after entering the hills, the ground became much more demanding to cross. Small rocks turned into large crags, the hills to pits and mini-craters. The party now has a choice: push forward, spending a Fatigue to keep their current speed, or slow down, adding an additional watch of travel to their journey. They agree to push forward, each character adding a Fatigue to their inventory. Had they chosen to walk slower it may have been safer, but they would have an additional half-day of walking to do tomorrow.

As night descends, the party finds a large, rocky, outcropping that would work as a suitable shelter. There is no water nearby, but this location should be sufficient for their current needs. They agree to Make Camp as their final watch, choosing a Watch Rotation that should allow all party members a decent rest, and a chance to shed any Fatigue they have. Each party member consumes a ration, and the Warden rolls on the Events table. The result is a Sign. The Warden describes the flickering ghost of a torchlight in the distance. Could it be another party, or perhaps bandits, or even a dangerous creature on the prowl?

The party rests, erasing their Fatigue. They mark their current location on the map, noting that should everything go well the following day, they should only have to spend one watch to arrive at the ruins of Ein Eyton by the afternoon.